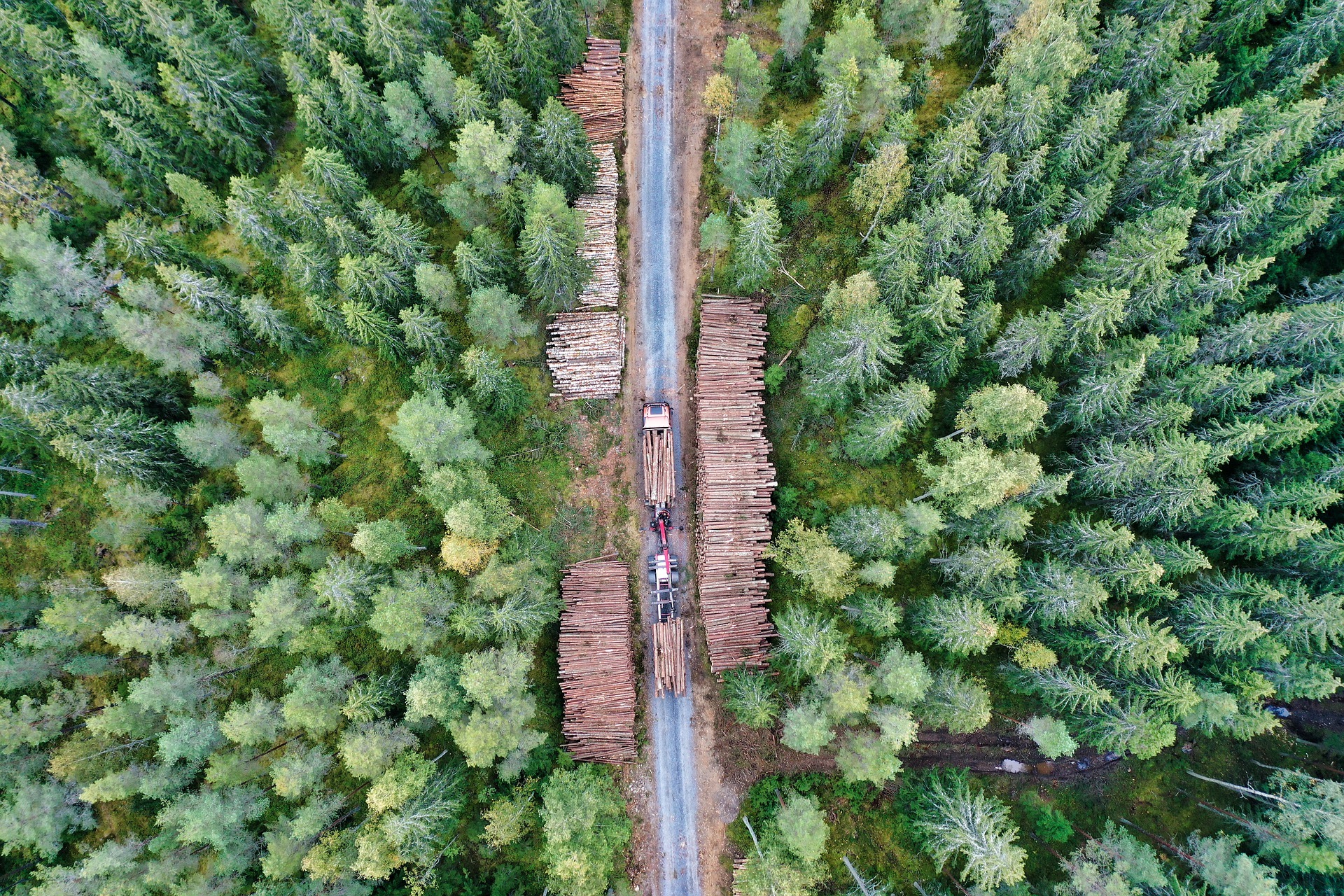 A shared vision for the food and agricultural sector in Finland

A shared vision for the food and agricultural sector in Finland

The ways we produce and consume food and use our land cost $12 trillion a year in damage to people and the planet  For example, two billion people globally do not have regular access to safe, nutritious and sufficient food.  Yet one-third of all food produced is lost or wasted, and food and land use systems overall account for close to 30% of total global GHG emissions. We must urgently shift our ways to models that benefit both people and planet.

Transforming food and land use systems requires long-term strategies and integrated thinking. The development of pathways through modelling tools is one way to shed light on the major transformations that are needed. Pathways can help explore the impact of potential future policies that have not yet been put in place or projected possible changes.

Pathways and models have been used by researchers across the world, including at the Food, Agriculture, Biodiversity, Land-Use, and Energy (FABLE) Consortium, to advise policymakers and frame better policies. In Finland, scenarios have been widely applied by researchers and policymakers since the 1990s to investigate the implications of climate change. However, the socioeconomic context in which future climate will change has received much less attention in Finland.

In this article, we present how researchers and policymakers have co-developed shared socioeconomic pathways (SSPs) with stakeholders for the agriculture and food sector in Finland up to 2050 and beyond. The resulting study was recently published in Regional Environmental Change.

Shared socioeconomic pathways (SSPs) consist of narrative descriptions and quantifications of future world developments. SSPs are narratives of the different future states of the world, characterising challenges to climate change mitigation and adaptation. They were developed by researchers and modellers to analyse climate change scenarios in this century.

There are currently five SSPs. Each SSPreflects very different contexts for the development of the sector up to 2050 and beyond. However, SSPs are developed at a global scale, and their adaptation to national and regional scales can be challenging.

Firstly, researchers still do not have a full understanding of all the different drivers in the food and agriculture sector and their impacts. Secondly, if researchers only extend the global SSP storylines to the national level, there is a risk the resulting storylines do not have national validity, buy-in from local stakeholders and policy relevance for future scenario analysis for food and agriculture.

Various stakeholders, notably those involved in food value chains, have substantial experience and an understanding of the drivers of change. The SSPs presented in our article resulted from workshop discussions, where close to 30 participants offered a wide range of sectoral perspectives.

Co-developing shared narratives for the food and agricultural sector

We began the workshop by sharing the general background of the SSPs for Europe and held facilitated discussions for each SSPs (except the SSP2). Researchers decide which SSPs to include based on the overall narrative and context. We had four groups of a diverse and balanced set of stakeholders, representing the essential parts that make up Finland’s food value chain . Discussions focused on five themes, each potentially having a strong influence on ongoing and future trends in agriculture that would operate alongside changing climate. These were (A) diet, (B) food industry, (C) agriculture and horticulture, (D) technology and (E) environment. Each theme was discussed from the perspectives of consumers, producers, and policymakers.

Stakeholders provided their views and interpretations for the SSPs within the national food and agriculture context: What would happen under this SSP and why? The results reflect careful sector-based, national-level interpretations of the global SSPs from which consensus narratives were constructed. The results also show important critical remarks and minority viewpoints. 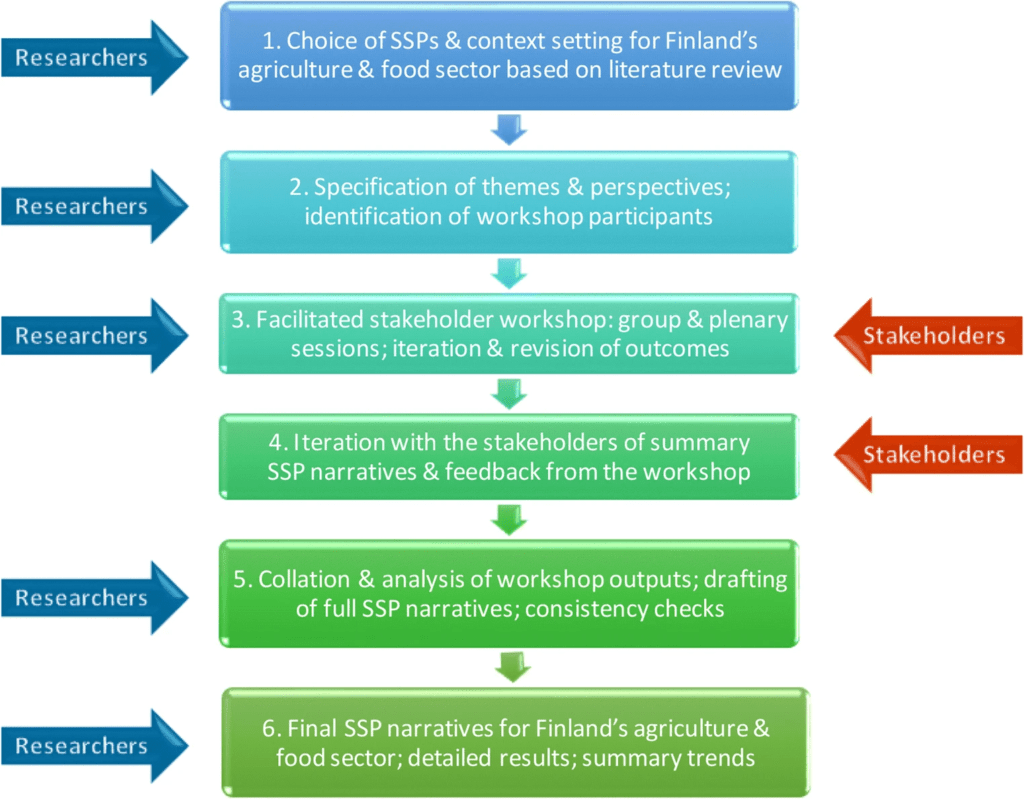 It is encouraging to find that the narratives developed for Finland align, in most part, with the ones designed for the entire European agricultural sector. Compared to the global SSP narratives, we identified interesting features in the ones for Finland resulting from the stakeholder consultations: (i) Greater emphasis on environmental quality; (ii) significant decrease in farmland area in scenarios with reduced livestock production and increased plant-based diets; (iii) need for continued agricultural subsidies across all SSPs; (iv) and opportunities to diversify domestic production under scenarios of restricted trade.

These results can contribute to the development of more detailed national long-term scenarios for food and agriculture that are relevant for local stakeholders and researchers and are consistent with the scenarios applied globally. The next step for our team is to quantify the national SSP narratives using an economic partial equilibrium model in a new project started in March 2021. The project consists of an additional round of stakeholder feedback on the quantified scenarios, including agricultural developments in different regions of Finland. We look forward to observing how these global socioeconomic scenarios are perceived by regional stakeholders.

From the modelling perspective, it is encouraging to find that the carefully constructed SSP scenarios can be combined with climate scenarios. For instance, Representative Concentration Pathways (RCPs) —greenhouse gas concentration trajectories— are already being used in crop modelling with outputs from economic modelling at the farm- and sector level. All this brings new opportunities for relevant analysis and further research.